The continued Youtube success of Gap Yah has got a mention in The Guardian G2 today!!!!!

VMproductions are pleased to announce that our Documentary 'Ehsan Shafiq: Afghan Shaolin' have been accepted into the London Independent Film Festival 2010!

"Kung Fu Master Ehsan Shafiq: Born in Kabul, Afghanistan he won numerous accolades but success also brought upon him danger. After several threats on his life and the war, he sought asylum in the UK and rebuilt his life" 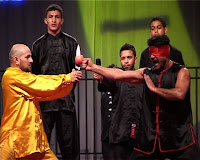 Watch Ehsan in Action on his YouTube Channel:
http://www.youtube.com/user/EhsanShafiq

For more information on the Festival see the link below:
http://www.londonindependent.org/index.htm

What a week for VMproductions!!!

Posted by VMproductions at 06:16 No comments:

Please check out this Facebook fanpage that was set up by a fan of the Comedy Sketch Gap Yah!

We think its great!!!

Gap Yah! In the Evening Standard!!!!

The Sketch has also made the evening standard today!

After the Huge success on Youtube of Gap Yah! It has got a mention in the Metro today!

Gap yah is #45 - Most Viewed (This Month) - on YouTube! Can you believe it?!
Thanks guys for all your support!

Posted by VMproductions at 14:28 No comments: